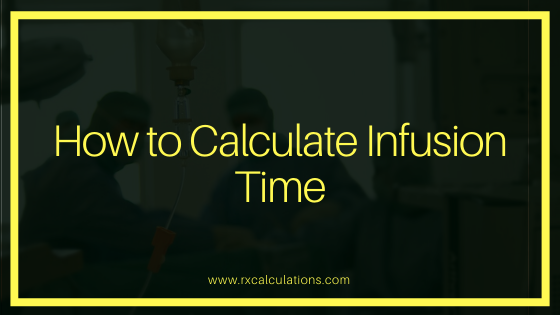 How to Calculate Infusion Time

Listen to the Podcast

I'm going to show you how to calculate infusion time when you know the IV flow rate and the calibration factor. And we are starting right now.

Hello, this is Dr. Danquah and if this is your first time here and you'd like to learn pharmaceutical calculation, tips, tricks and more, then start by subscribing and clicking the bell so you don't miss anything.

So in this tutorial, I'm going to solve two questions and it's part of a series on IV flow rate calculations. If you want to check out the other videos, I'll put links in the description and cards should be showing up pretty shortly.

So let's take a look at the first question which reads a 750 mL bag of D5W is to be infused at 70 gtt/min using a 50 gtt/mL administration set. How long would the infusion take in hours? Round the answer to the nearest tenth. Do not include units. 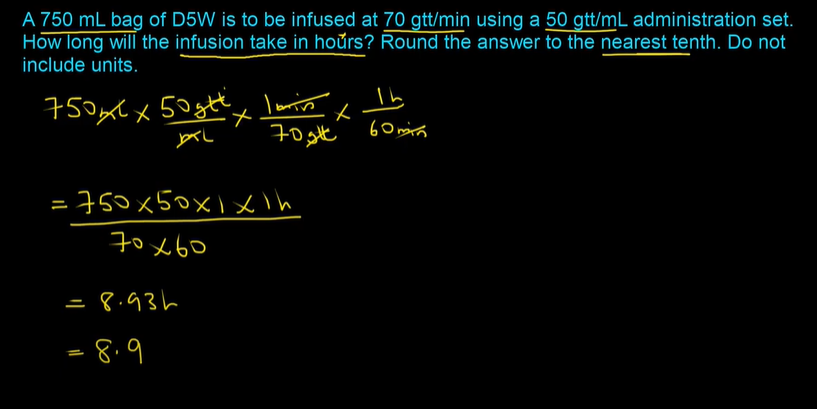 So let's start by analyzing the question. The goal here is to determine the infusion time how long it is going to take, we've also been given three additional parameters.

So there are number of ways we can proceed but the first thing we want to do is to actually take the volume of the bag that is being infused.

So we have 750 milliliters of D5W which is going to be given to the patient and to get rid of the milliliter unit, we want to use the calibration factor. Okay, so we multiply this by 50 drops per milliliter.

And the reason we're doing that is because in dimensional analysis, the only way you can cancel out units is if you have one in the numerator and the same unit in the denominator. Okay, so in this example, the milliliters can cancel out and you are now in drops.

So our next task is to get rid of the drops so that we have a quantity that gives us time. Okay? So if we look at the last term we have the flow rate, which is in drops per minute, but we want to flip that here.

So what we will say is one minute, every minute, you're able to give 70 drops. So now that you have the drop term in the numerator and one in the denominator, you can cancel the drop term out, and you're left with units of time in minutes.

And we could stop here if that was what the question was asking for time in minutes. But since the question is saying how many hours we need to do an additional step, and we make use of the conversion factor, that 60 minutes, make an hour. So the minutes now cancel out, and you're left with the time quantity in hours.

The next thing that we want to do is we want to take all the terms the numerator, which would be 750 times the 50 times one times one hour and we divide that by all the quantities in the denominator. So that would be 70 times 60.

And when we do the math, that should give us 8.93 hours, but notice that the question is saying round to the nearest tenth. So that will mean that our answer will be 8.9.

No time to read the article now?

So now let's take a look at another example. And this question says a 1000 mL bag of lactated NS is ordered to be infused in a patient undergoing septic hypotensive emergency at a rate of 180 gtt/min using a 60 gtt/mL administration set. How many hours would it take to infuse this amount of fluid? Round to the nearest tenth. Do not include units.

So let's take a moment to analyze the question. What are we looking for? We're looking for time. It says how many hours will it take to infuse this amount of fluid. So that's infusion time.

The other quantities that we have be given is the volume of the bag that's 1000 ml of lactated normal saline, we have the IV flow rate and we have the calibration factor also known as the drop factor.

So what we want to do is to start off with the volume of the bag, we have 1000 milliliters and we need to get rid of this milliliter term. And so what we need is some quantity that has units per ml and if you look at information we've been given, the calibration factor basically gives us that.

So to get rid of the drops, we need a quantity that has the drop element. And also we want to get the time so we need something that has time as well. And that's where the IV flow rate would actually be pertinent, okay.

But what you want to do is want to flip it. So we'll multiply this by one minute, because in every minute, you have 180 drops.

And so this drop term can cancel out. And we're now left with time in minutes, but the question was asking how many hours?

So what you want to do now is to use the conversion factor that says 60 minutes, make up one hour, and so the minutes can now cancel out.

And so the next thing that we can do is we take all the terms the numerator, which would be 1000 times 60 times one times One hour, and you divide that by the quantities in the denominator.

So you have 180 times 60. And if you go ahead and do the math, you end up with 5.56 hours, but we don't stop there because the question says round to the nearest tenth, do not include units and so we'll have 5.6.

Do you have any questions or strategies on how to calculate infusion rate? Share them in the comments box below.

How to Determine Volume of Solution to Infuse 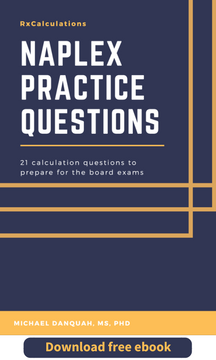 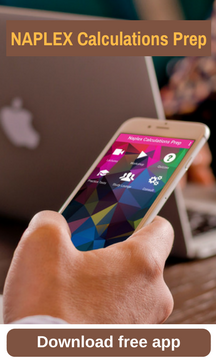 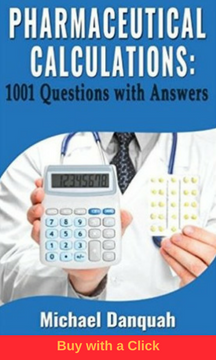