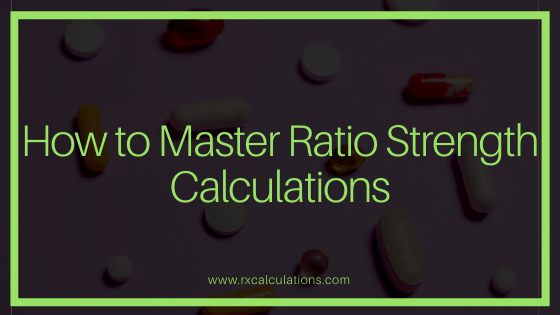 In this blog post, I will show you how to master ratio strength calculations by providing a brief review of the different ways of expressing concentration, defining what ratio strength is and discussing how ratio strength should be interpreted.

I will also demonstrate how to convert percent strength to ratio strength and vice-versa, and show you how to calculate the ratio strength of a pharmaceutical preparation using three NAPLEX type example problems.

How to Master Ratio Strength Calculations

Listen to the Podcast

I'm going to show you how to master ratio strength calculations and we are starting right now.

Hello, this is Dr. Danquah and if this is your first time here and you would like to learn pharmaceutical calculations, tips, tricks and more then start by subscribing and clicking the bell so you don't miss anything.

So let's get right to it. This video is the first in a series on ratio strength calculations, so be sure to check the other videos when they do come out. But for this particular tutorial, what we're going to focus on is accomplishing four major things.

But before we go ahead and dive deep into ratio strength, particularly, I just need to give some context. And that has to do with the ways in which we express concentration. So generally speaking, when you have a preparation, you're going to have a solute and a diluent.

And so the solute could be like the active pharmaceutical ingredient an API, and your diluent could be maybe a solvent like water, or a base like petrolatum. But the whole idea is at some point in time, you should be able to describe in terms of concentration, the amount of your solute in the total preparation, and that's where we have various ways of expressing concentration.

Why Are There Different Ways of Expressing Concentration?

So the question becomes why are there different ways of expressing concentration? And the short answer to that has to do with the notion that pharmaceutical preparations typically come in different strengths and so you need an elegant way to describe how concentrated preparation is and you want to do it in such a way that you can easily convey that information to another professional so that they can either go ahead and compound that preparation or dispense it.

So the next question that comes up is when do you use the different ways of expressing concentration?

So typically, what happens is if you have a fairly concentrated preparation, a fairly strong preparation, you will use percentage concentration because this lets you know the amount in grams out of 100 milliliters or hundred grams or whatever the units may be.

So as your solution gets more diluted, if you have a weak solution, for example, then you end up using the ratio strength because at that point in time using the percentage concentration approach becomes unwieldly. Okay, so you end up with so many zeros and the likelihood of making an error actually skyrockets.

Okay, so let's look at a few examples just to illustrate that point. And then we can jump into the ratio strength calculations.

So the example of a strong preparation will be one that has maybe 2% concentration, so that's 2%. The same concentration expressed as a ratio strength to be 1:250. But if you're going to express that in ppm, that will be 20,000 ppm and then you have 20 million ppb. So as you can tell, it is more elegant to use 2% instead of 20 million ppb, okay?

Now if you had a weaker solution, such as 1:20,000, then if you're going to express that as a percentage concentration, that would be 0.005. And now you are beginning to have too many zeros and so the likelihood that you may miss one or you may put it down wrong just increases. And so it's much easier to put down 1:20,000 or perhaps 50 ppm, but definitely not 50,000 ppb.

And now, if you have a very dilute preparation, for example, 1 ppm or one part per million, then if you are going to express that as a percentage concentration, you have 0.001 or you have one is to 1 million as a ratio strength or 1000 ppb.

So, that was to give you a quick overview of the ways of expressing concentration. So that we have a better understanding of how ratio strength fits into the spectrum of the different ways in which you can express concentration of your preparations.

No time to read the article now?

What is Ratio Strength?

But what exactly is ratio strength?  Ratio strength describes the drug concentration in terms of a ratio. So, what that means is, you have one unit of solute contained in the total amount of preparation and so normally your ratio strength is written as one is to something. For example, you have 1:2,000 depending on whether you have a weight-in-weight, volume-in-volume or weight-in-volume scenario, you would interpret this accordingly.

Now, it's important to understand that the ratio strength is always going to be one is to something. So if you had two grams of solute in 800 milliliters of preparation, what you don't want to do is to say 2:800, that will not be correct, rather it is going to be 1:400. So you always reduce the ratio in such a way that you have one unit of the solute to a certain quantity of your preparation.

All right, so here we have an example which says Express 0.02% as a ratio strength.

So that should be equal to one gram over x milliliters because our ratio is going to be one is to something.

In this example, it says what is the percentage strength of a 1:500 zinc oxide ointment?

So here because you have an ointment, we know it is going to be on a weight by weight basis, alright. So we take the definition of ratio strength for the weight-in-weight scenario.

And that would be one gram of zinc oxide divided by 500 grams of preparation. So that would be the ratio. And now we set up a proportion. So for percentage strength, it's some quantity in grams out of 100 grams.

So the next thing we want to accomplish in this tutorial is to be able to calculate the ratio strength of a given pharmaceutical preparation.

And so in this example, it says an 80 mL solution contains 40 milligrams of drug. Express the concentration as a ratio of strength.

And so we need to bring to mind the interpretation of ratio strength. And if we did that, in this example, we need to have eventually one gram of drug to some quantity in milliliters of the total preparation.

So the one gram represents the one unit of solute or one unit of drug, and we need to figure out what the total volume of the preparation will be accordingly.

So we solve for y, and y equals one gram times 80 milliliters divided by 0.04 grams, and that gives us 2000 milliliters. And so the ratio strength of this preparation is going to be 1:2000.

So if you found this video useful, be sure to like it, share it and subscribe to the channel. And if you have any questions, put them in the comments or send me an email at info@rxcalculations.com and I will see you in the next video.

Do you have any questions or strategies on how to master ratio strength calculations? Share them in the comments box below.

How to Determine Volume of Solution to Infuse

Read More
How to Determine Volume of Solution to Infuse